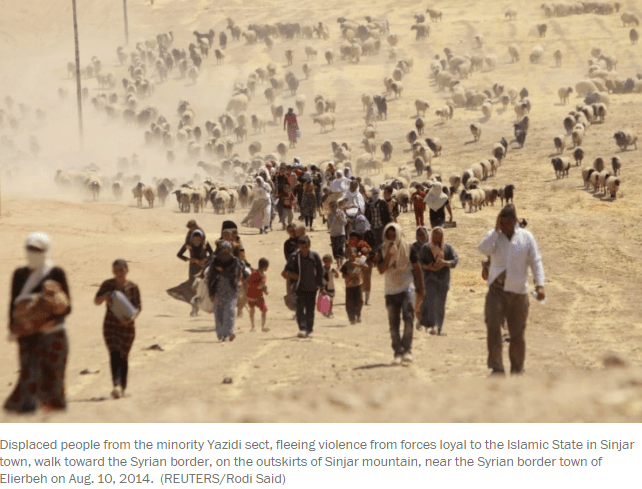 The Middle East is under Turmoil

President Trump’s abrupt decision to withdraw American troops from northern Syria sends a powerful message in a dramatic shift to realign its foreign policy in the region. Current international coalitions in the region are reassessing their objectives. The future remains unclear.

Turkey will take over the fight to remove ISIS but also include containment of militias protecting the Kurds along with minority religious factions.

The Yazidis are stuck in the middle of conflicts in Turkey, Syria, Iraq and Iran.

Unconfirmed Reports but Plenty of Hope

[An opinion and pure conjecture.] Whatever the outcome, Turkey’s president, Recep Tayyip Erdoğan, said last week that Turkey would cooperate with the planned withdrawal of US forces from the area. An unforeseen strategy, President Erdoğan is ignoring the international coalition but listening to President Trump. This may give President Trump the leverage he needs to demand safety for the Kurdish militias to protect religious minorities in the region.

Donald and Melania Trump visit US troops in Iraq

Update: 26DEC2018. President Trump said the US could use Iraq as a forward base if “we wanted to do something in Syria,” Reuters news agency reports. BBC News.

Error: (#10) To use "Page Public Content Access", your use of this endpoint must be reviewed and approved by Facebook.
Solution: See here for how to solve this error